Some groundhogs (?) eating my fledgling pumpkins

We just woke up to something eating our pumpkins in the patch. It looks like it might be gophers, since there are some that are slightly nibbled to being mostly hollowed out. We have deer in the area. I’m not sure if they like eating pumpkins or not. I’ll be going to get a couple of traps and some night cameras so that I can get more information. In the meantime, given that we are in the process of getting a fence up, does anyone have any good ideas of what will deter groundhogs from eating things? Based on what I read in the New Farm book, I’m not encouraged that anything but a shotgun will get rid of them. I don’t want to use poison since it could kill our cat and other feral cats in the neighbourhood.

We had critters nibbling and hollowing out our watermelons and pumpkins, couldn’t tell what was doing it but my guess was raccoons given how dexterous they are with their little paws and how wasteful they can be.

Don’t have a lot of specific advice beyond have you tried dried/liquid blood as a repellent? I’ve had some success with that in the past.

What kind of tracks are being left? Deer will have sharp fairly deep hoof prints with large steps. Groundhogs? only if you have visible nests where they have burrowed into the ground, and you should be able to follow their trail. My bet is raccoons, and they tend to travel as a family for dining out… Night cameras should confirm. A live trap set with some discarded pumpkin might catch one of them. Have a look at Skoot or some kind of smelly substances to deter them can buy from Co-op or TSC. Fences, all too climbable for coons and jumpable for deer.
So far, I consider myself lucky not having that problem and I have to thank the local wolves and coyotes that keeps deer, coons, rabbits and even mice away because we do not allow hunting, we don’t have a problem with animals eating our veggies or flowers.

We’re going to look into some dried/liquid blood options as a repellent. I’m thinking that it might be rabbits, since I saw some small gnawing on some of the fruits nearby and saw some in that vicinity. Will also be reviewing the camera footage shortly. 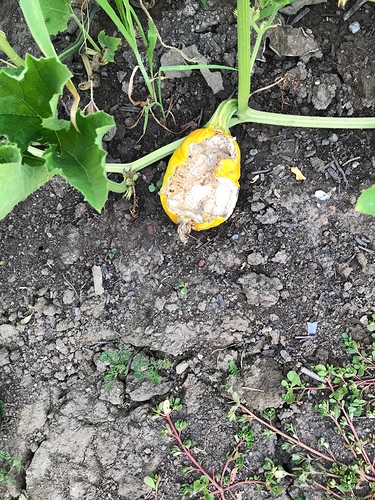 They didn’t leave much mess so I’m thinking it’s not raccoons. I set some traps out to try and get them, but I didn’t get any near the patch.

A raccoon was however eating our cat’s food, so I set a trap with some marshmallows, which was successful: 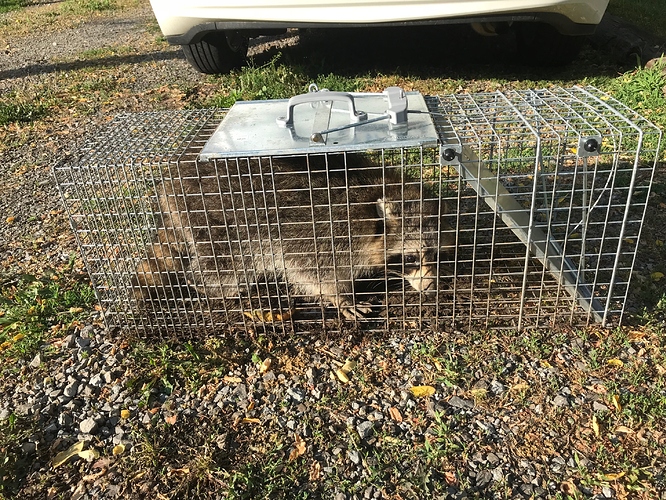 I haven’t seen any more damage since the original occurrence. We will have a 4’ wire-mesh on the lower part of the fence with an electric fence in the 4-7’ portion.

Unfortunately, with the dry weather we’ve had recently, I couldn’t see any footprints. We have coyotes and coywolves in our neck of the woods and so that may keep the population of critters down. However, there are still a few of them that seem to survive. Thankfully, the groundhog doesn’t appear to be on the property (for now).

Droppings can also given the critter away if they stay in one spot long enough to snack, so maybe keep an eye out for those too.

So, we’ve reviewed the video footage and it turns out that it is deer that are eating things. That explains the tidy eating of the pumpkins. So, once the fencing materials I have ordered arrive, then I can get working on the fence. We already have our electric fence materials so I’m just waiting on the bottom fencing materials. Thanks everyone for your help. I’m going to pick up some dried blood repellant in the interim.