Noticed a change in one of my tomato varieties this morning that I hadn’t noticed two days ago. The newer leaves at the top (new growth) are curling and some are grey/black and wilted. This looks like grey mould to me, but I’m really not sure. Can anyone else weigh in and help me diagnose this?

I’ve only been watering at soil level and the plant and leaves have very seldom been wet, so I’m not sure how I would end up with a fungal problem so early in the season. 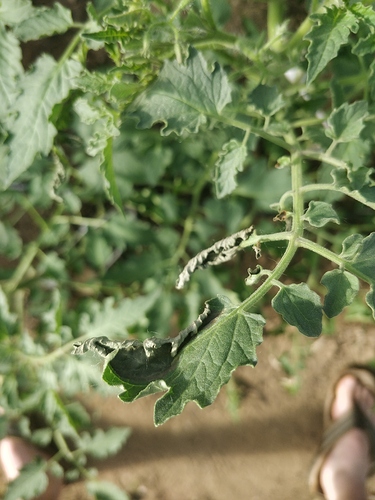 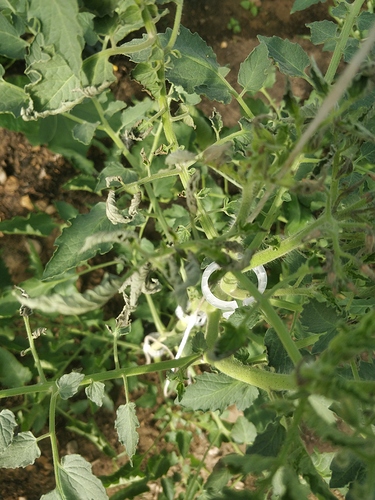 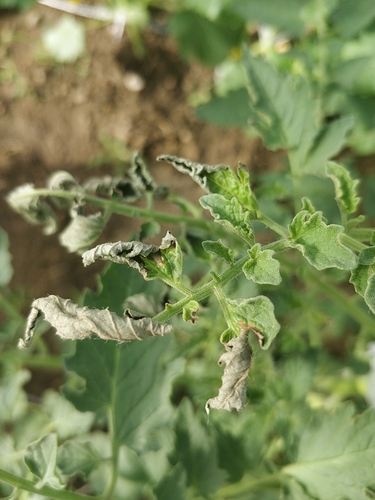 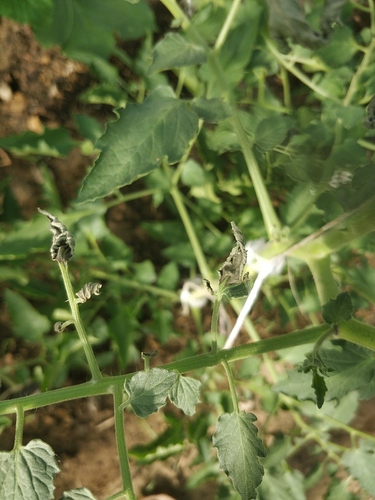 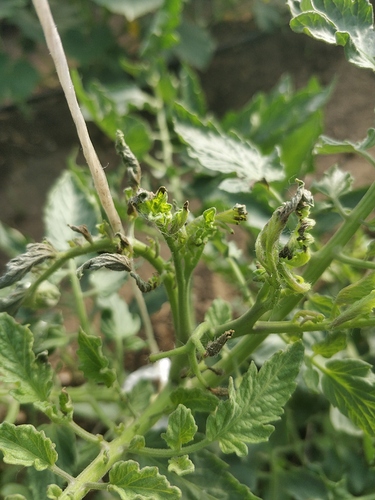 Yikes! Sorry to hear about that, Denis. I hope it is not blight. I had my tomatoes wiped out two years ago because of that.

That being said, if you did get a lot of rain like we have been getting here this season, we may all be in for some blight issues.

According to my Rodale’s “Controlling Pests and Diseases”, if the leaves are curled, cupped and blistered, then the possibilities are leaf gall, mosaic or another viral disease, as well as peach leaf curl, herbicide drift or insect pests.

I also read a description in there for verticillium wilt that looks similar. It says that the fungi can stay in the soil for years. The discussion suggests that it can often appear on only a few branches or on part of the plant, usually outer or lower branches. “If you cut the affected stems open, you’ll often see a light brown or yellow discolouration extending upward from the based of the stem.”

It doesn’t look like peach leaf curl: I’ve seen that before. The grey colouring worries me since that it’s some form of blight b/c of the weather. I’m going to be putting lactic acid spray on my tomatoes regularly for this reason. I want to try and muscle out any fungal spores if I can.

Those look like really interesting supports. What are those white clips you are using to support the plants?

Good luck with figuring that out. Hope it isn’t anything serious.

Thanks for your input Rodney!

It’s the darndest thing, 3 weeks ago I ended up removing all of the material that was “infected” as seen in the photos I posted, and you know what? None of it ever came back or spread to other plants…! I’m still not quite sure what to think of it. None of the symptoms fit any tomato disease/pest that I’m familiar with, including blight. As for verticillium, symptoms show up on older growth, not new growth as was the case for me, and it definitely wasn’t alternaria (early blight). Quite the mystery!

As for the clips, these are just plain old greenhouse trellising clips, fairly inexpensive. I think I got a bag of 1000 for about 20$.

This isn’t where I bought the clips, but at least it gives you an idea:

Wow! That is super weird. Glad it resolved itself. Maybe it was just some form of environmental stress? After posting that, I went out and looked at my tomatoes because I had some curling and discolouration on the lower initial branches. 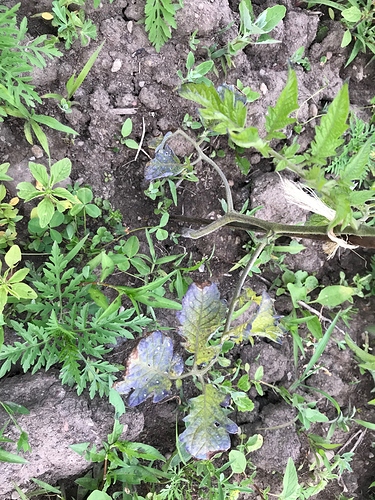 We had this happen last year as well. We just removed the affected branches and everything was fine.

Thanks for the link to the clips. I’ll definitely check those out. Hope you have a great crop this year!