We have ordered the following seed to improve our sheep pasture: birdsfoot trefoil, alfalfa, chicory, orchardgrass, and meadow fescue. Some of the areas we will be seeding are currently in fall rye. We will try to graze the rye closely then drill the forages. If we don’t have time to graze all those areas, we will go over them with a cultivator
​, then drill. The other areas we will be seeding are unimproved pasture that we grazed very hard last fall, or will put our donkeys on very soon; they are very good at removing vegetation.

We have several questions we’d be grateful to have some feedback on. First, when would be the best time to plant? We assume it would be as soon as the ground is thawed enough that the seed drill’s furrow opener can cut it and dry enough the tractor won’t wreck the soil structure. Is that right?

Another question is about our particular seed drill. It is an old Allis Chalmers All-Crop. We have used the main seed box to sow rye, and that worked fairly well, but we’ve never used the grass-seed box. The hoses coming from it are obviously not original; somebody has replaced the originals with lengths of garden hose. Our question is, are they set up properly? The lower end, where the seed would come out, is several inches above the ground. Is that how theyr’e supposed to be, or should they be replaced with longer hoses to go into the metal tubes the larger, corrugated hoses are currently inserted into? Or some other configuration? (I tried to upload a photo of the drill, but apparently that isn’t going to work, for some reason.)

the alfalfa should also go in the grass seed box. the hoses are fine the way they are set up.make sure the seeds in the large seed box do not go in too deep.seed to soil contact will be your main issue.you may have to pull a packer to press the seed into the soil.plant the earlier the better as even though you closely grazed the pasture last fall the forage there already has a root system and will get a head start on the new seeds thus shading the new shoot .a good rest period after pasturing is a very effective way to inprove your stand.the root system below ground will mirror the amount of growth above ground and the root system supports the regrowth .rule of thumb is to take a large pop bottle to the field and when the growth is as tall as the bottle put the livestock in and when it is eaten to the point where it is as tall as the bottle on its side take them out.

I second the advice about running a packer, it’ll help your germination rate quite a bit! As for grazing, you definitely are better off making smaller spaces and rotating within them more often as opposed to depleting larger spaces and then moving on. As was said before, it weakens the root systems, and thus the plants in general. If you get hit by a drought they won’t be as resilient and subsequent growth will be very slow. Though I’m guessing you grazed them hard so you could pave the way for seeding it this year.

As for mixing the seed, you might want to do that prior to putting them in the seeder to make sure the mix is homogenous enough, if not your pasture could end up being “patchy”.

Thanks so much, sylvanfarms and Denis - very helpful!

I came across this photo this morning and thought I would post it here.

Minnesota farmers seeding newly cleared land in Alaska in 1935 with a caterpillar and a seeder. Note the packer behind the seeder. 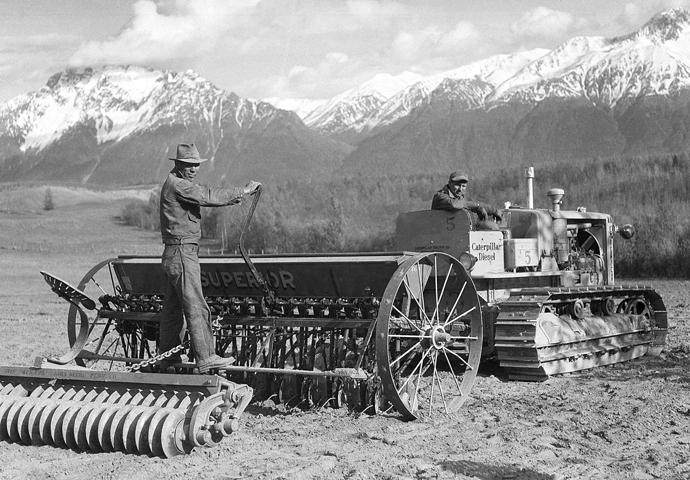 Great photo! I guess they weren’t too worried about compaction, eh?

They probably bought those on the cheap from Dust Bowl farmers looking to get rid of their heavy equipment.

Here is the photo you were trying to post Jim: 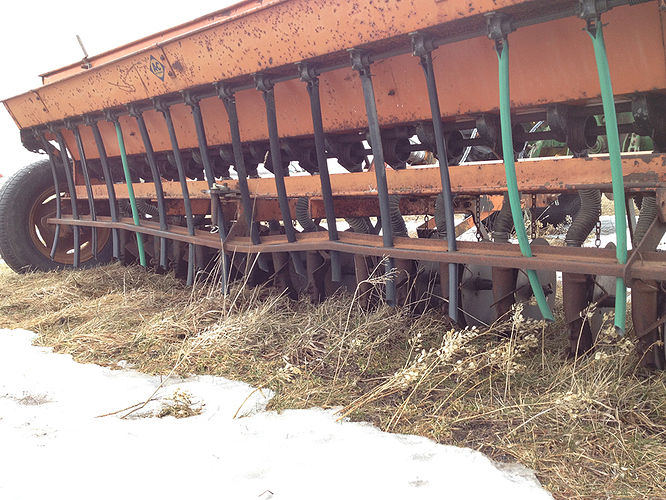 I would definitely run a packer behind this or you run the risk of all the seeds already present in the soil outcompeting the seeds from your grass box that are essentially broadcast on the surface behind the seeder (which will take longer to germinate).

I wouldn’t be worried about the length of the hoses.